With six locations nationwide, you’re never far from a flyboarding experience! With an expert instructor at each venue, giving advice and hands on tuition, you’ll soon find yourself mastering the basics of the sport.

Places are limited, so don’t miss out on the water adventure of a lifetime and discover the freedom that is flyboarding at any of the locations listed below: 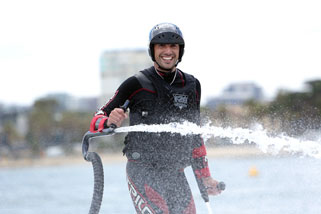 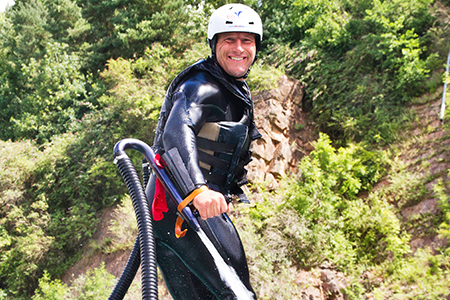 The Craziest Thing on Water!

It’s time to totally reinvent the water sport; so get ready for thrills and spills that no other water activity can even hope to come close to offering!

Not that long ago, this would have been the stuff of sci-fi movies! Yet here it is – and it’s like Iron Man for the every man. It is one of the world’s fastest growing sports and you can now flyboard the world over!

What is a Flyboard?

A flyboard is like a bit of aquatic magic. Well, actually it’s a board holding two shoes with propulsion jets at the bottom. This is connected to a jetski via a ten metre, powerful tube that blasts water through the bottom of the flyboard facilitating lift.

Add to that some directional hoses for the wrists (at least for beginners), along with some serious water pressure and you’ll have the ability to soar as high as 30 feet above and below the surface!

The Flyboard was invented by ace PWC racer, Franky Zapata who first started testing production models in 2011, before unleashing the beast onto the world a year later. His latest invention, the Flyboard Air, is the next step of the machine – one that uses no hoses, water or assisted flying. It is a true hoverboard!

Tricks of the Flyboard Trade

It doesn’t take that long to learn the basics controls, in fact you’ll be surprised how quickly you’ll feel confident with being able to control the beast.

And that’s where the fun really starts! You won’t be able to help yourself – you’re going to be doing dives, spins, twists and blast offs.

Then you might consider adding a couple of backflips, before deciding if you’re brave enough to do the ‘Dolphin’ – sweeping into the water for a short burst beneath the surface, before shooting back out into the sky! 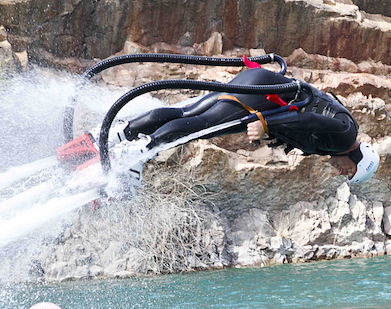 From the Docklands to Dumfries

Is there a minimum age?
What about weight and height?
What about health & vision?
Will I be able to fly?

Is there a minimum age?

Please refer to the FAQ section on each individual flyboarding location page for the minimum and maximum age limits.

What about weight and height?

Please check the FAQ section on your preferred flyboarding venue for the height and weight restrictions of that location.

What about health & vision?

You are advised not to take part in this event if you are pregnant of have any of the following: dislocated shoulder/wearing a cast, heart conditions, severe back issues, under medication that will make you drowsy

If you are cautious in water please let us know.

Will I be able to fly?

The vast majority of people pick flyboarding up far quicker than they imagine they would! If you’re having problem, your expert instructor is on hand to make sure you get the most from your experience.

Is it suitable for beginners?
Can friends come along to watch?
Can I have a drink to prepare?
Are there discounts?

Is it suitable for beginners?

Yes, all of our base flyboarding experiences are tailored towards the beginner. If you have experience and are comfortable with the flyboard, let your instructor know and they work with you to your ability.

Can friends come along to watch?

Normally yes, but it is worth checking with the crew when you book in your time, in case there is something going on at the venue that might prevent spectators being present.

Can I have a drink to prepare?

If you are under the influence of drugs or alcohol then your flight will be cancelled without any refund. Flyboarding is a full throttle, dynamic watersport and as such you need to be sober and ready for the action!

Full day private hire can work out a little cheaper but otherwise we do not offer discounts on the flights. Flyboarding requires an instructor, a jetski, fuel and insurances to name just a few costs. All prices are set to reflect the overheads and to be as affordable as possible.